So, who is this WTL guy?

W. Thomas Leroux (hence the WTL) has run a small business since 1999,  shooting & editing video, manages specialized web servers, and occasionally does custom training courses living in Ottawa (Ontario, Canada), who runs this blog, has videos online at YouTube and elsewhere. I can be also found scattered across the Internet – see the sidebar for links – and a .plan file from the early 1990s, if you know where to look.

Back in February of 2005, I was one of the people who started the Bytown Mac User Group (ByMUG), originally created to serve the Market area and downtown Ottawa, which leads to the obvious statement that yes, I am a Mac user. I officially switched on December 27th, 2003, so that we could start preproduction on the aforementioned DVDs.

We have a nine-ish year old Miniature Pinscher (MinPin) named Boing, who admittedly spends most of her time sleeping or staring at Tracey. – Boing passed away April 23, 2010

I am a member of the last generation that was born and *did not* have a computer in the home, never mind the Internet. I have been “online” in one form or another since the late 1980s, starting at 110 baud (a blazing 12-13 characters per second), and working my way upwards as technology and budget allowed.

So.. What’s with the lemurs? 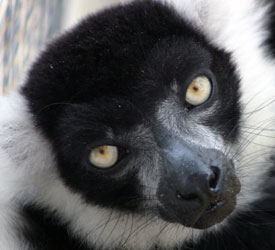 Honestly, I’m not really sure. If you have seen any of my recent-ish (last 3 or 4 years) video work, you may have noticed at the very end of them, there is a mention of lemurs. You’ll have just have to see it, I suppose.

I had never really seen one until a trip to Brockville, Ontario on July 10, 2005 when Tracey was there to perform at the street party they had, and in my wanderings, came across a small “petting zoo” that had a Ring Tailed Lemur (where the images at the top of the site came from). They act like they know something *very* important, but can not decide if they should tell you. Certainly, that is completely anthropomorphizing lemurs, but hey, you’ll have to look one in the eye to get what I mean.

Lemurs are fascinating creatures – and unfortunately, quite endangered.

One thought on “About WTL”