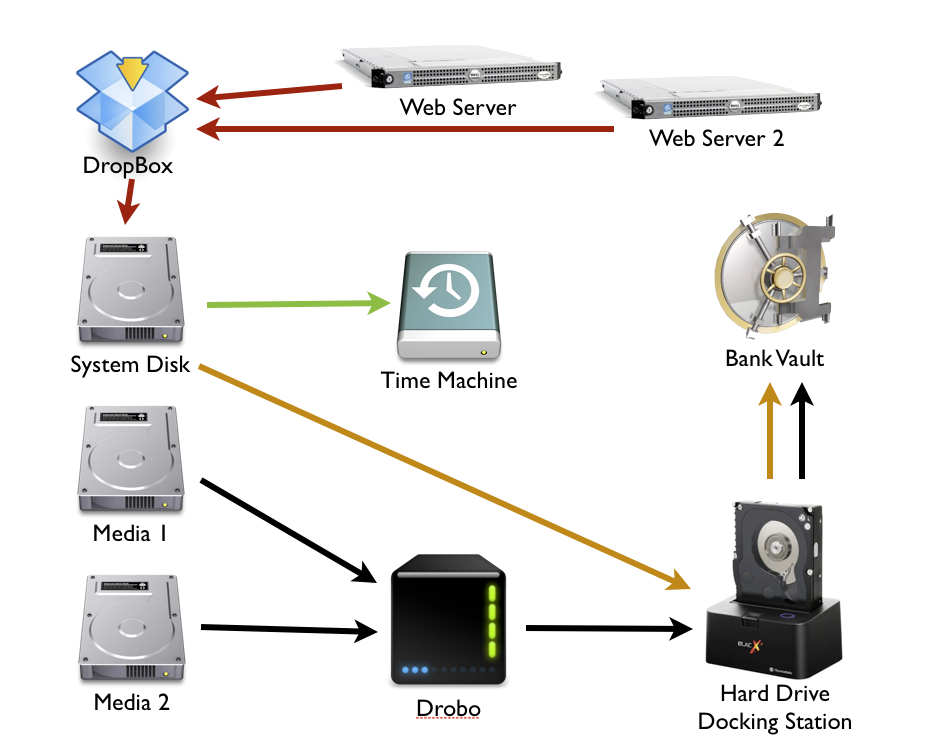 There are two kinds of people; Those who have lost data and those who will lose data.

Anyone who knows me, especially ByMUG meeting attendees and people who have taken my Introduction to Mac classes can attest that I am a hardcore believer in having good, reliable backups.  After a recent ByMUG and at my friend David’s urging, here is how my backup mechanism works.  It is almost certainly more than what you need, but if you have questions, feel free to ask!

I’m one of the people who has lost data, and have learned my lesson.  In fact, I kept the hard drive that died, and mounted it’s controller card on my wall as a reminder.  Think I’m kidding? You can see it in this photo (just right of center, top of the photo. If you look carefully, you’ll find the platters from the drive as well).

System description
Before I talk about the how, let’s talk about the what.  Part of my day job is as a server admin and I like to have backups of all of the servers that I (or my clients) have data (websites) on, which brings me to the first rule of backups: Don’t trust other people’s backups. There’s nothing worse than thinking someone else has it covered to find out *after* data loss that they didn’t.

I also edit video, which itself generates terabytes upon terabytes of data, all of which needs to be backed up, as well as all of my business and personal files; my music, photos, videos, email and other cherished digital bits and bytes.

I do understand that my situation is extremely unconventional; I don’t think I know anyone else with as much data to back up. But I do, and so can you.

One of the hard drives in my MacPro is a dedicated Time Machine drive, which makes incremental backups of all my files on the system drive (even my DropBox).  In my case, this serves as a safety net to protect against accidental file deletions and to fill in the blanks for my offsite backups.

Time Machine is dead simple to configure (want a video?), and works as long as the back up drive is plugged in (and on). This is a great first step to backing up that all Mac users can do.

Time: A few minutes per web server (and runs nicely in the background)

Once I had migrated most of the websites I maintain to ServerNorth, Myke and I got to talking about backups and he reminded me that I could use rsync to back the web server up to a folder on my computer.

In this case, I decided to rsync the webservers to a folder in my Dropbox account.  Dropbox is a service that allows you to create a folder on your computer that is encrypted (AES-256 encryption) and sent up to a server, and (here’s where it gets amazing), any computer you connect to with your Dropbox account will have a copy of the files. So, in my case my Mac Pro, MacBook Pro and iPhone all have access to the web server backups.  Even handier, DropBox allows me to create a shared folder with clients who also then have a backup of their web server files.

I could automate the rsyncs, but I like to do them manually so I can keep an eye on them.  Down the road, this section may get it’s own dedicated post if there’s demand.

Every Thursday night, I put one of my backup drives into my BlacX docking station and use SuperDuper! to make an exact, bootable copy of it.  Should my system hard disk stop working for any reason, I can put this drive into my Mac Pro and pretty much carry on from there.

Cost: Drobo $370+ and Hard Drives $Varies – hard drive prices are always falling, but I usually budget around $100 per drive these days.

Much of my video work resides on two other hard drives in the Mac Pro, cleverly named Media and Media 2. This data needs to be backed up as well, so I back this up to an original USB-only four bay model Drobo, and a newer Firewire 800 four bay model Drobo.
I selected the Drobo as a local backup device as it took four hard drives of differing sizes and made them one contiguous, redundant space which can survive the failure of one of the hard drives with out any data loss, without my having to fuss with the occasional hassle of managing my own RAID array.  If a drive fails in a Drobo, you pull it out, swap in a new one, and the Drobo takes care of the rest. Here’s a video I did on January 1, 2009 of a drive being added to my Drobo.

Time: A few minutes per disk (one time)

This part of my backup regime is the newest. I recently have finished making disk images of all important software CD and DVDs using Apple’s Disk Utility (File –> New –> Disk Image from…) and saved the disk images onto the Drobo for easy access and safe keeping as I do not particularly trust CDs and DVDs over time.  I’ll write up a post on how to do this one of these days.  However, with Apple moving to distributing all it’s software through the App Store, this will become a little less important.

Time: About twenty minutes to an hour a month

With all the data going to the Drobo, that has to be backed up as well, so about once a month, copy the newest files from the Drobo to a drive connected in the BlacX.  I haven’t actually worked out an ideal way to manage an incremental backup of the Drobo, so I’m open to suggestions.

Time: A few minutes a week

All the drives that I’ve backed up Thursday night using the BlacX go to the bank with me on Fridays to be deposited into a safe deposit box, and have the previous week’s backup drives taken home with me.  This means that at any point, shy of an asteroid hitting the city, I would at most loose a week of local data (but not what was in Dropbox).  And if an asteroid hits the city and I somehow survive, I have a entire set of non-data loss problems to deal with that would be much more pressing.

The backup drives don’t have to go to the bank – they could go to a friend or family member’s home.  I use the bank as it’s the most convenient for me (and I get my banking done at the same time!).

Keeping backup copies of your data isn’t complicated, as you can see – and admittedly, my system is pretty extreme, but yours doesn’t have to go that far.  The first step is to at least start somewhere.  For Mac users, buying an external drive and setting up Time Machine is a great first step.  There are plenty of options for Windows users (recommendations, anyone?) as well – I’m just not much of a Windows user anymore.

You wouldn’t believe how many people who have bought backup hard drives but have never  plugged them in to run that first backup because it will take a long time.  Plug it in, set it up and go to bed!

My Simple Rules of Backup:

If you have any questions, ideas, or suggestions, I’d love to hear them – I am always open to improving my backup system, or helping others get something in place.

One thought on “Backups: Your data is important. Backups are easy.”