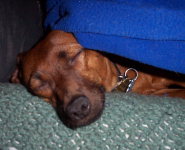 If E is indeed equal to MC�, the does that mean that the answer to life, the universe and everything is 42? 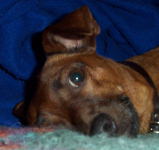 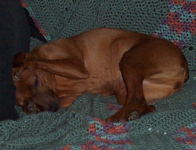 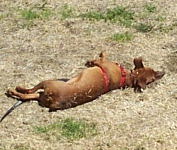 Boing at the farm. 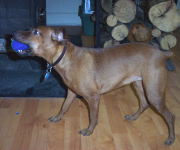 Its a hard life you know. 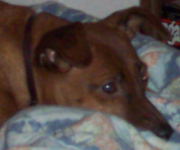 Oh, to be outside – but its really cold out. 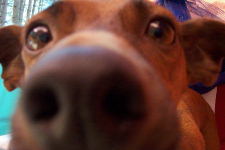 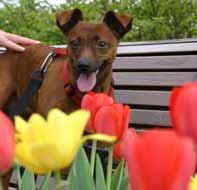 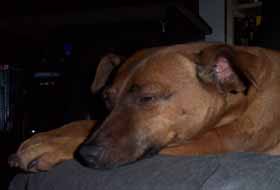 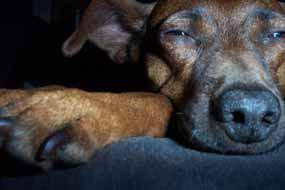 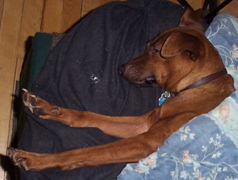 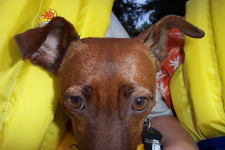 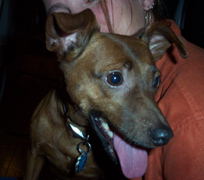 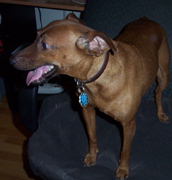 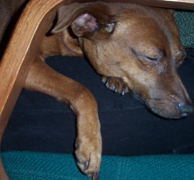 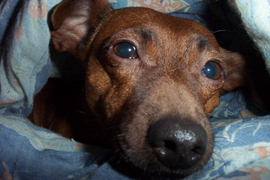 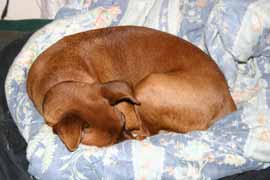 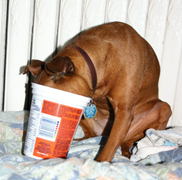 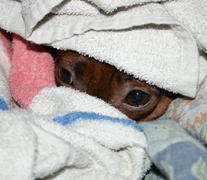 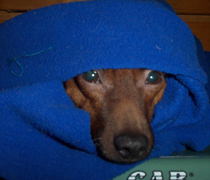 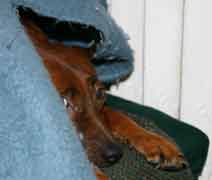 Boing, exhausted from a day of socializing and lapdogging on Canada Day 2003. 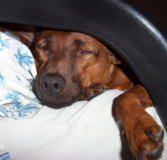 Boing and her stylish life jacket in the canoe. 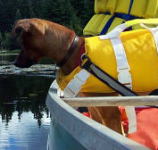 I’ve been working on this post for quite some time, but today I realized I had to finish because a cute Miniature Pinscher pup came up onto the deck at Patty’s and looked in at me through the glass. I’m not superstitious, but I can take a hint.

When we arrived at my family’s 1999 Christmas, we were first introduced to Slinky, this somewhat bug-eyed miniature pinscher who instantly adopted Tracey and her lap.

Tracey was just as taken with Slinky and when she found out that dad was looking for a home for her, she was ready to bring her home right then. I asked for a bit of time to consider, and within a month or so, Slinky was in her crate in the back of our car driving to her new home in Ottawa.

We pondered a name change to match her more closely, and I came up with Boing, based on her seemingly unending amount of energy, and the Amiga’s Boing Ball.

We’d spent the time researching how to train her, and we began the process of crate-training and clicker-training her.

The first few nights of Boing’s spending the night in her crate provided us with some valuable data; having children might not be for us. No matter what we tried, she demonstrated her impressive abilities at making different sounds at a wide variety of volumes to indicate her displeasure with being in the crate at night instead of curled up on our bed.

Eventually, the battle of wills settled into a truce of sorts; she would willingly sleep on top of her crate in the bedroom, until she got bored and started to walk around, wake Tracey up with her incessant tick-tick-ticking, and then get kicked out of the bedroom. Sometimes sleeping like the near-dead like I do is a serious advantage.

Boing quickly became an integral part of our lives; I’d chase her around the apartment making funny monster noises, work on teaching her new tricks, she’d stare at Tracey to indicate she wanted more lap-time.

Nearly everyone who met Boing liked her, although initially she wasn’t too great with children (or my sister) who loved to pull on her soft, floppy ears, but over time, and with a bit of training the kids, she learned to tolerate them and even sometimes be playful.

People tend to anthropomorphize pets – especially one as expressive as Boing, with her bug eyes, floppy ears and huge eyebrows to emote what we thought she was thinking. Over the years though, we did, I think learn to read her fairly well, and her us. Boing loved camping where she’d merrily lie in the sun, defend our site from the squirrels and chipmunks, or sleep in the hammock with Tracey. She’d get excited when we would bring out her life jacket to go for a paddle. Although there was ample room for her to lie down, she much preferred being up front so she could see everything.

Last year, she had it figured out that she didn’t have to stay up with us at night while we played cards, instead making a bee-line for the tent to go to bed instead of staying up and shivering for hours.

When motivated, Boing was quite clever – she learned a slew of tricks, and I thought it was pretty hilarious when I renamed her crate to “jail”. I’d tell her to “go to jail”, and she’d tear off to get there as quickly as possible.

Nearly every day, Tracey and I have lunch together, and Boing, after a fashion, ate with us. We would almost always add a bit of the soup or other table scraps to her food for variety, and she would excitedly watch us for the cue that she could go and have hers.

She’d watch us with the laser-like focus that only she could muster when motivated by the potential of yummy food, with her little stub of a tail wagging away at 75 wags per minute, and sometimes, if it smelled *really* good, a bit of drool.

Boing would spend most of her day sleeping on a box that Tracey and I had built which put her roughly equidistant between us. I could also tell when she was sleeping in later years as she’d developed a slight snore when she was deeply asleep. Unfortunately, in the second week or so of April, Boing started to act a bit unusual, and we rapidly realized that something was very wrong.

Tracey took Boing in to the vet for them to have a look see, and then I took her for some blood tests. The walk over with her was a very clear indicator to me something was really wrong. Boing loved to pull on the leash – she *can* heel, but everything is usually so exciting. I ended up carrying her in a duffle bag within two blocks of our place to the vet and all the way home, which she certainly seemed to enjoy the higher vantage point.

Within a day or so, it was determined that she was suffering from chronic kidney failure (incurable), apparently something that is common in older dogs.

I remember the moment very clearly when Tracey called me to tell me what the vet had reported, we discussed it and finally, I said it aloud; “Boing’s dying”.

Saying the words drove home that our googley-eyed, stubby-tailed, furry constant companion and occasional pain in the butt was dying. This was something I knew would eventually happen, but not for many more years. Wrong.

Conceptually, “quality of life” is simple to understand, and makes complete sense to me.

Both Tracey and I believe in quality of life, not quantity. Ideally we hoped that Boing would pass away at home in her sleep, but by the afternoon of Friday the 23rd of April, it was clear that we should take her into the vet to have her put to sleep.

In practice however, actually deciding that Boing was suffering enough to warrant ending her life was one of the most heart-breakingly difficult decisions Tracey and I ever had to make.

We got ready for the thirty minute final walk to the vet with Boing, who did not have the strength to walk, so I carried her the entire way in the duffle bag.

The staff at Beechwood Animal Hospital were amazingly kind, and quickly moved us to an exam room to be with Boing.

The time came to make the decision if we wanted to be with her when she died or not, and clearly neither of us had the emotional fortitude to do that.

We were given as much time as we wanted with her and when we were ready to leave, we let the staff know, who kindly took over for us, helped with the paperwork and asked if we wanted to be notified when Boing died, I said yes.

The walk home seemed much further, as we contemplated the beginning of our lives without Boing.

We arrived home and moments later, the phone rang rang in that way that we both instantly knew the news it bore was not good, but I answered it anyway, as I really didn’t want that message on our answering machine.

The woman I vaguely remember speaking with assured me that Boing had died peacefully and painlessly, and after that things get really fuzzy.

The effect of the loss of such a close member of our little family is difficult to put into words. Tracey and I decided fairly early on that we were not going to have children, so Boing was as close we were going to get.

A short aside; sometimes when people lose their pet like this, asking days later if they are planning on getting another pet is pretty much akin to asking a parent whose child had just died if they were planning on having another.

Drastic, certainly, but from our perspective, it’s the same thing, let me tell you. So maybe you shouldn’t ask – just wait for them to bring it up.

Tracey quite quickly put up a last post on Boing’s blog that notified everyone what had happened, along with a link to a pile of photos on Flickr of Boing we’d taken over the years, and I posted the tweet; “.@BoingTheMinpin passed away Friday night ~7PM after a 2 week battle w/ chronic kidney failure. It’s been a rough few days, needless to say.“, both of which reminded the two of us of the quality of our friends, on and offline. Thanks to you all, it helped. Nearly seven weeks have passed since Boing died, and I still catch myself doing things as if Boing is still here, or expect to see her little bug eyes looking at me when I wake up in the morning.

Both our lives were deeply enriched by the little bug-eyed dog who thought she was as big as a Newfoundlander.

I’ll think of her frequently, miss her dearly, and remember her fondly.

Thanks for coming into our lives, Boing.