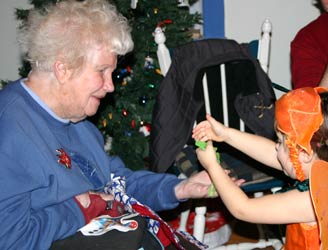 On March 13th, a Saturday morning, a few minutes before eleven, the phone rang shortly after getting out of bed, and I knew it was bad news before I even answered. It was my dad, calling to let me know that my grandmother had died overnight.

I waited six hours to partially to make sure my cousins Janice and Karen didn’t hear about it as a Facebook update – (my tweets are sent to Facebook to give an illusion that I’m on there regularly), and partially because I couldn’t write it yet.

We couldn’t say that it was entirely unexpected – Tracey and I were loosely planning on going down on Sunday to see her as we’d been warned by dad that she had been decidedly unwell the past week or so (which is code in my family that means they’re dying).

That doesn’t really make it easier. That said, having the opportunity to say goodbye doesn’t always help either.

Grandma was our (my sister and I) main mother-figure in our early life while my father was a single dad. We spend many afternoons, evening, and weekends there with her and grandpa.

Things I remember about grandma

Almost every year in grade school, grandma conspired with teachers to have a birthday party for me in school, and made cakes with coins wrapped in wax paper as surprises for the kids.

I’m pretty sure I was in Cubs and Scouts because of her, so part of my super-human-camping-dude kung-foo is due to her.

As I wasn’t the smallest kid around, she always said I was “husky”, which to me sounded much better than fat. Heck, it sorta sounded like I could be dangerous – you know like Jack London’s Buck.

She teased me about having a hollow leg dedicated to mashed potatoes. I think I still do.

If I did something to make her cross at me (her terminology), I’d know nearly instantly – by the stare I’d get.

She loved to watch Coronation Street and Dallas.

Sometimes, I would watch her play cards with her friends, and she’d get me to do reconnaissance for her. Of course, they all knew what I was up to, and then one day I realized she had me spying on her partner, they all had a good laugh.

Chicken noodle soup with cheese and crackers fixes nearly everything.

She’d take my sister and I to the store she worked at and let us run amok.

She taught me manners and how to be polite, apparently too well, as sometimes I get teased about it.

Apparently she mixed brandy into my warm milk to help me sleep as a kid. I still like the taste of brandy today.

While I was socially awkward as a kid, I envied how she seemed to know everyone where ever we went. I’m getting there.

I have a vague memory of going to the “north pole” somewhere in New York state with her and grandpa (and Jenn, I think), but got “the look” when I asked why we were driving south to go to the north pole.

Only after her death did I learn a few things; she spent a year in the hospital in the 1960s recovering from burns that covered 18% of her body from a kitchen accident.

She apparently knew that she was dying, and was firm in her wishes that she be alone when it happened, and that she be immediately cremated after. To my knowledge, we do not have any incidence of zombification in our family, so I thought this was somewhat curious.

The wakes and funeral where everything I guess one would expect from such an event, people came from far and wide to pay tribute and say goodbye to such a wonderful woman.

To say I will miss her doesn’t convey the depth of the feeling, but each day I live, I know that many of the best parts of my personality are because of her.