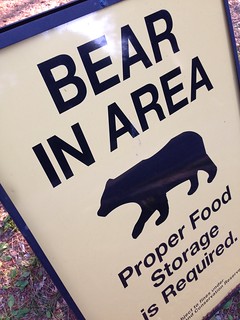 You know me, I get to wondering about things. And sometimes it gets me into trouble.

While we were camping, I got to wondering how long of a walk it would be to walk past every single campsite in the Pog Lake / Whitefish lake campgrounds.

On one of the last days in Algonquin Park, I had time to do it. Tracey was content to chill at the campsite with Sprocket, listening to a book, so I walked up to the park gate just off highway 60, and headed into Whitefish.

At the far end of the Whitefish group campground, there’s a site that backs into forest, which has a path that connects up to the road that leads into the Pog Lake campground.

Shortcut! But not that day.

Normally, when I’m walking along I listen to audiobooks (in this case, Bitten: Women of the Otherworld), except in areas where I feel I should be paying extra attention to my surroundings, like when I’m entering an area with no one around me for a hundred plus metres.

I’d turned off the audiobook well before I’d gotten to that point as I approached the forest and headed in. About twenty metres in, I heard noise, so I stopped to see what it was.

Then I saw the source less than ten metres ahead of me as it came out of the bush.

At this point, I began looking around me to make sure that the mother wasn’t anywhere close to me – last place I wanted to be was be between the cubs and the mother.

Then, she came out of the bush behind the cubs.

At this point, my brain kicked in high gear. I’ve run into bears plenty of times in my years in the park, and know how to handle encounters with them.

But never an injured mother with cubs. Injured animals are notoriously difficult to predict, and throwing in that it was with its young, I wasn’t exactly sure what to expect.

I opted to remain still, non-threatening, facing them, hands on my hips, and announced my presence when I cleared my throat.

They all stopped and looked at me for what was probably three seconds, but felt rather longer.

The cubs decided I was boring and continued goofing off in the bushes, but momma bear just kept looking at me. Seconds dragged past. She made a noise I’d best describe as an exasperated huff, then looked at her cubs.

I took that opportunity to take a single, quiet step backwards.

She looked back at me… More seconds crawling by, then back to her cubs.

And I took another step back.

This game continued for about ten steps, at which point mom decided I was no longer an item of concern, and joined her cubs.

Their path was basically perpendicular to mine, but I decided it was just as easy to head back the way I came.

On my way to the Pog Lake campground, I popped into the campground office to report that the bear sighting and (more importantly) that she was injured.

When done there, I fired off a quick text to Tracey to let her know what had happened and continued on my walk, playing the events over in my head.

All in all, it was pretty amazing. And I didn’t have to fight a bear.

Oh, and in case you were wondering, the answer to the question that caused all this is twelve and a half kilometres.

Here’s a zoomed-in photo I took with my iPhone once I was far enough away. 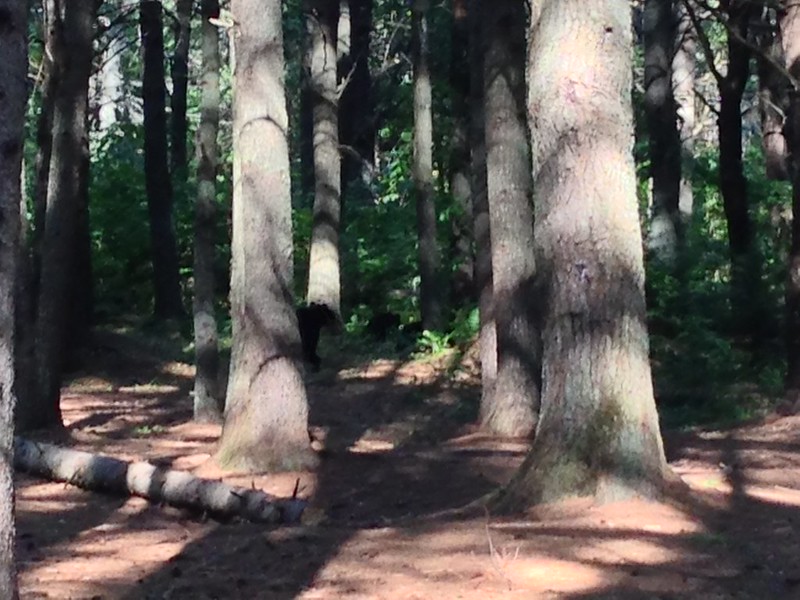 4 thoughts on “Ninety seconds of Oh-My-Bear”