Up until the end of September, classical music didn’t really figure very much into my day to day life, although fifteen years ago I did listen to it with some regularity. Fortunately, the universe decided that I needed to be re-introduced to it by way of the National Arts Centre’s Orchestra.

A few days before the event, I was kindly invited by JCovert of the National Arts Centre (NAC) to attend Mozart’s Final Piano Concerto Beyond the Score® (originally produced by the Chicago Symphony Orchestra).

Unfortunately, Tracey was unable to come with me due to client appointments she had previously made for the custom sewing aspect of her business.

Some other local bloggers were invited to attend as well, such as (in order I ran into them) Bambi Blue, SimonSage, Suzemuse (who kindly texted me from four meters away), AlienDaddy and FenderGurl.

Prior to taking our seats, we were taken aside by Daphne Burt who gave us a run down on how the evening would go – tried to not use the word “mimes” when describing one aspect of the performance, a bit of history of the NAC, and pointed out the “Nixon room”, which during his visit to Ottawa in April 1972 (I was two weeks old) was declared by the Secret Service to be the most secure location at the NAC in case of.. well, I’m not sure – maybe a bar fight? This is Canada, after all. Back on topic. 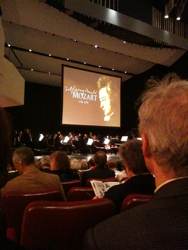 The evening was split into two parts; the first was spend going through the concerto, one section (movement?) at a time, with the narrator (Bill Richardson), and an actor playing the part of Mozart (Pierre Brault) giving the audience details about the music itself, as to what was taking place in that era, and what potentially Mozart was thinking about when he wrote specific parts.

This must have been very difficult for the orchestra – play a bit, pause, play a bit more, more pausing, then playing again, over and over. The start-stop-restart-stop nature would drive me batty.

After a brief intermission in which I wandered around the lobby eavesdropping to get a sense of what the audience thought (quite positive), and then I looked for Suzemuse and friends, who were busy shooting video and tweeting.

The second half of the show the NAC’s Orchestra got to play the entire piece all the way through, which after the insight provided in the first half, I throughly enjoyed. 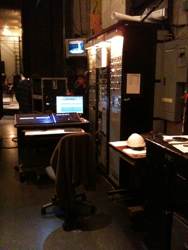 After the performance, we were treated to a tour backstage – which for me, he who salivates at the sight of DVD extras – was fantastic, where we learned that about the Fortepiano that the NAC borrowed from Ottawa U, and some of the challenges with putting on such an event, and then listening to Pierre Brault acknowledge that the future of reviews for performances is many individual voices, while surrounded by photos of many of those who have worked at NAC.

More photos can be found in my Flickr set. And, as a special treat, thanks the the folks at the NAC who kindly allowed me to record from my front shirt pocket using my handy-dandy iPhone, a couple of minutes of audio for your listening pleasure:

I waited a while to see if this experience would affect my long-term music-listening habits, and I’m pleased to report that it actually has. In the past few of months, I now regularly move out of my “Tom’s music” playlist, which is where my daily listening comes from – it’s a hugely variable range of tunes (Lacuna Coil, Sting, Moby, Pink Floyd, Megadeth, Bjork, Johnny Cash, Daft Punk, Underworld, Epica) and into my “Classical” playlist, which is largely popular classical, but I’m working on expanding that (suggestions are welcome!), as it seems to have found a place in my life.

Predominantly, it seems that I listen to classical when I’m pensive, or need to clear my mind so that I can focus on a new task, or to wind down.

One of the difficult things I have found with classical music is that it’s hard to find the “good stuff” – most places that sell music online provide a thirty second preview, which is almost entirely useless for classical. In many cases, the first thirty seconds are spent slowly warming up to the piece which doesn’t give me much of an indicator as to what to expect.

Currently, I rely on two sources of daily free music – the eMusic and Magnatunes’ daily free song, both of which are occasionally classical in nature. But beyond that, I turn to you, my readers; Any suggestions?