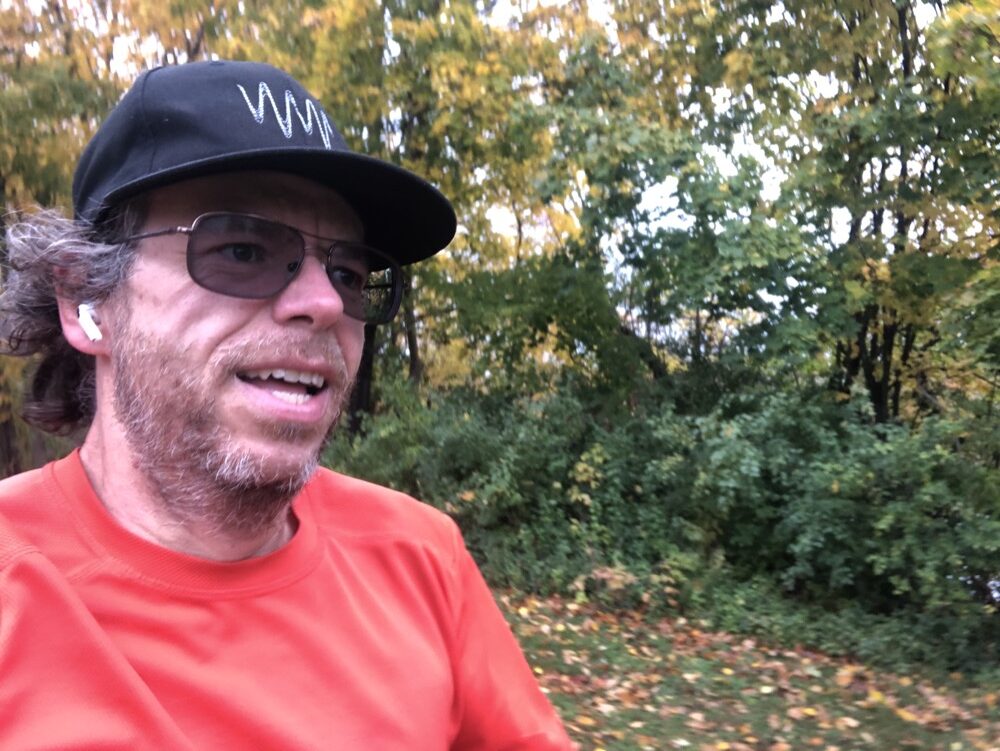 All this running is the result of a chance meeting.

I’ve been a committed distance walker (or perhaps a distance walker who should be committed, depending on your point of view) for many years. For those of you new around here, in 2019, I walked over 8,200 KM – and I suppose I should point out that I love numbers.

Late in the afternoon of Tuesday, October 29th (2019), I was in the last five KMs of my daily walk, came across my friend Sonia, whom I’ve known for many years through Kung Fu, as she was about to start a run on along the Rideau Canal and she encouraged me to give it a try. 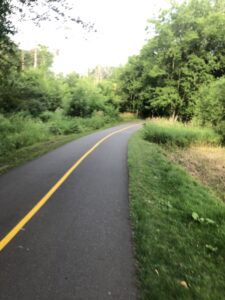 I managed a bit over two kilometers before I had to stop, with my heart jackhammering in my chest at over 160 BPM.

Had I been even one minute faster along my route, I would have missed Sonia and I don’t believe that I would be running today – the thought of trying to run distances at all honestly hadn’t occurred to me as I was fairly sure I *couldn’t* run.

Two weeks later, I met her to make another attempt, managing a bit over three kilometres.

The seed was planted.

I decided to try running occasionally on my daily walks through to the end of the 2019, mainly focusing on running up and down the hills along my route, figuring if I could do those, I could manage running on the flat sections.

At the beginning of 2020, I decided that I would give running a more serious try. Three and a half kilometres non-stop on January 1, Six KM on January 4th, 8.6 KM on the 8th, and the full distance – 21.1 KM on January 22nd – although slowly. It took a while to do it again, alternating running as far as I could, then walking until I could resume running.

This seemingly fast progress can be attributed – I think – to that the year before I’d already been pushing my walks faster and faster; clocking a half-marathon distance (21.1 KM) in around three hours, helping build my leg muscles. 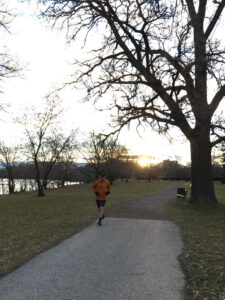 An observation I made early on is that runners are friendly and encouraging folks.  Early on, I noticed when a runner was coming from the opposite direction, they’d make a gesture of some sort; head-nod, a friendly wave, thumbs-up, etc – the first few times, I would look behind me to see if they were waving at someone else – because I can be slow at social things, I realized they were waving at me, so I started waving back.

One spring day – I was running along the path through a lovely forested section, really struggling to keep my pace up, and felt quite defeated.  Then this young university student comes around the bend, sees me and gives me a big double-thumbs-up with a grin. I waved back and managed to run for another thirty minutes before slowing to a walk.  I find it fascinating how small positive actions from others can really help.

From September onwards to the time of this writing (March 4, 2021), I was running a half-marathon Monday to Friday and a 10k on Saturday and Sunday (although I did take a “break” between Christmas and New Years where I ran 10 KM per day).

Somewhere in the summer, I listened to the episode of the Optimize Yourself podcast with guest Wes Plate talking about his personal journey of being overweight, deciding to do something about it, starting to run, and moving on to running ultra-marathons (any distance over 42.2 KM) including running the Moab 240 mile (384 KM!) ultramarathon. 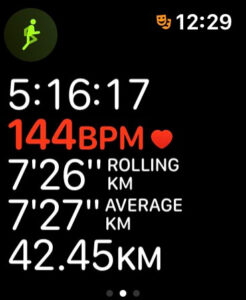 Needless to say, I began to wonder how far I could run.  In late September, I gave it a shot. I got up early, stuffed food into my belly, and went out the door.  I learned a lot that day; that I could run over 30 KM without needing food or water, that I could finish a marathon in a bit over five hours, that the day was too hot to be out running, and that by the time I got home, I was completely burned out at 66.4 km. So, I slowly walked up and down the driveway util I hit 66.66 km because it amused me.  My amazing partner Tracey kindly went out and got some celebratory hamburgers and poutine from Koven for dinner.  I repeated the run on March 27th, finishing the 66.66 (which I’ve decided to call the Hellish Run because I’m silly) in a bit under nine hours, and covering the full marathon distance in under five hours.  I really run out of steam a bit after the marathon distance.  I didn’t need water until I got a bit dizzy at the 38km mark, and ate a couple of energy bars once I covered the marathon distance.

Running in many ways can be as much a mental challenge as it is a physical one, even now, hundreds of runs later. When my brain wants to stop, I am reminded that it’s The Blerch speaking (Thanks, Oatmeal!), I ask myself if I “can run just a bit further” and eventually finish my KMs for the day.  There has been trip and falls, an alarming number of bloody nipples, lost toenails, muscle pulls, and sore body parts.  There has been high heat, pouring rain, thunderstorms, ice, crazy wind, deep snow, and intense wind chill. 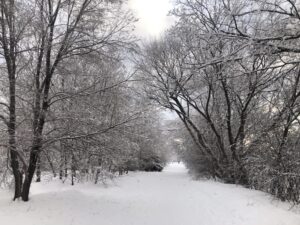 Even with all this challenges, it’s all worth it to me.  There is a sense of self-satisfaction upon completing every single run, regardless of the conditions.  Every run – like every walk – is different, and I get to see our beautiful city, its people, and myself change over time.

Today marks 190 days of continuous running on the schedule I set myself (a daily half-marathon Monday to Friday and 10 KM on Saturday and Sunday), and I still love it. Some days are harder than others, like today’s run with -27°C windchill and winds gusting to 39 KM/hr, but I also get to start my day with an accomplishment.

My journey from a daily walker to a daily runner was a serendipitous event that changed my life, and I am so profoundly grateful it happened.

The support and encouragement I’ve received from my partner Tracey, my off and online friends, and family have been so very helpful. Thank you all!

18 thoughts on “The Serendipitous Runner”